The incredible story of diving 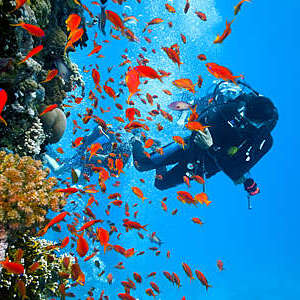 This news belongs to our archive.

We could give you a million reasons why standards are key for the tourism industry, but sometimes all you need is one story to make it real. So here is the tale of one man, a small company, and a revolutionary standard that transformed one of the largest tourism activities worldwide: diving.
Scuba diving opens up a world often inaccessible to man. It is an adventure of discovery where the ocean reveals its hidden secrets. This wonder and beauty has its share of risk. Yes, diving can be hazardous, not just for participants, but also for the environment. The good news is that with adequate precautions, the danger can be reduced to acceptable levels.

But how do we know what these precautions are? Most diving centres offer training; but if you are new to the sport, choosing a reliable instructor is tricky as you might not know what to look for. You may then focus on the price, ask your friends for advice, or turn to the Internet for recommendations. But there is one other factor to consider, and that is International Standards.

This wonder and beauty has its share of risk.

Our story begins in Vienna, Austria. The small land-locked country has had a firm place in diving history since Austrian diving pioneer Hans Hass (who sadly passed away in June 2013) inspired a generation to get involved in what was then a new activity – recreational diving.

In 1994, Martin Denison, an Austrian diving expert of British origin, set up his own franchise business in Austria using an American qualification system to train divers and instructors. The tiny company flourished… until a new sports law required that teachers have a licence issued by local authorities on the advice of the relevant national federations. This meant that Austrians trained in the American system would no longer be able to teach diving, including those in Martin’s company.

Martin turned to Austrian Standards (AS) for help, the ISO member for the country. Most standards at that time targeted products, and diving would become one of the first to focus on a service. AS rallied together the different stakeholders in the industry and developed a national standard for diver and instructor training that allowed certification. For Martin this meant that, even if he used the American training system, as long as he complied with the requirements in the new national standards, instructors would be recognized by local authorities.

Yet this was only the tip of the iceberg and diving standards were soon to become one of the great success stories of standardization in the services sector.

Soon, countries outside Europe started to show interest and the standards were adopted by ISO, who maintains a cooperation agreement with CEN to avoid unnecessary duplication of work. Over the past 15 years, the standards have found wide acceptance in diving schools around the world.

This is important because adequate training is central to the sport. Standards put the diver first to ensure a high level of quality and safety. They consider the needs of both recreational divers and scuba diving professionals, and bring benefits to all stakeholders in the industry.

As a result, the current internationally recognized diver qualifications mean clients can compare and select the best offers from diving centres around the world. For training organizations and service providers, standards create a benchmark for “state of the art” best practice. Instructors can use them for worldwide recognition, and tour operators can confidently select the best partners for their diving tours. Even governments and regulators can rely on standards as part of their licensing systems for diving centres.

Take Greece for example. There was a time when, out of thousands of kilometres of shoreline, only a tiny stretch of about 160 km was open to divers. But the country was among the early adopters of the standards and made certification of training and diving centres compulsory. Reassured by the impact this would have on the safety of the industry, diving is now allowed almost everywhere in the country, bringing huge benefits to the tourism industry.

Similarly, when Egypt made ISO 24803 for recreational scuba diving service providers compulsory, over 600 diving centres started to be audited on a yearly basis. After just two years, Egypt reported a 24 % decrease in the number of diving accidents.