Building more sustainably is becoming a necessity to address tomorrow’s climate and environmental challenges. Grenoble-Alpes Métropole has established itself as a leader in sustainable cities. 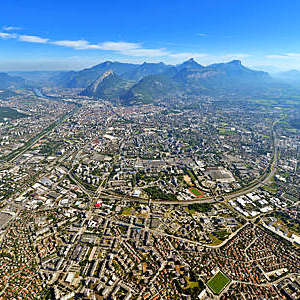 As Europe’s largest alpine metropolis, Grenoble, dubbed the “capital” of the French Alps, has set itself a number of challenges, such as creating eco-neighbourhoods that are pleasant to live in, building a bioclimatic school and developing an urban farming project. For more than a decade, the city has been the focus of an extensive undertaking to create a community that is more energy-efficient and environmentally friendly, while meeting the demands of its current and future inhabitants.

A tall order, indeed, as Grenoble has to deal with the considerable geographical and climatic constraints of its mountainous landscape. Thus, the city’s future lies in promoting a controlled urban development which uses less space, reorganizes vehicle access, reduces city-centre congestion through “soft” modes of transport and relies on clean energy resources and sustainable architecture, all of which have an impact on the well-being of citizens.

This wide-scale project is part of the EcoCité initiative, launched by the French government in 2008, which aims to find new ways of designing, building and managing cities. A partner in this initiative, Grenoble turned to ISO 37101 as part of its urban renewal programme. This common-sense standard, which provides a valuable reference tool for evaluating innovative urban projects, aims to make Grenoble more effective in achieving the major sustainable development objectives that the community has set itself. ISOfocus asked Christophe Ferrari, President of Grenoble-Alpes Métropole, for his thoughts.

ISOfocus: There’s a lot of buzz around what it means to be “smart”. What does that mean to a city like Grenoble?

Christophe Ferrari: The Grenoble region is a space for projects, for innovation and for social, environmental and technological experimentation. Born out of a pioneering culture in which risk-taking forms an integral part of its approach to progress, the Grenoble conurbation is constantly changing and reinventing itself.

In a global context of unprecedented environmental and social challenges, the Grenoble-Alpes Métropole area qualifies as “smart”. The city has adopted digital and new technologies in its quest to become a leader in the energy transition and combat climate change and social division by developing new types of services and forms of cooperation. In other words, a metropolis whose appeal is based on its citizens’ well-being and quality of life, and for which sustainable development in all its three forms – economic, social and environmental – is the common thread in all its policies.

Which smart solutions are already being implemented in Grenoble?

Grenoble’s EcoCité programme already includes the consolidation and emergence of demonstrators and model districts for a smart, sustainable and resilient city. What’s more, the metropolitan area is developing experimental projects that are unique in France involving the intelligent and collaborative management of energy data (Métro Énergie project, originally called VivaCité). These programmes are based on a partnership approach with a wide diversity of stakeholders in the region: local authorities, universities, research bodies, companies, residents and community groups.

New digital technologies and social innovation, combined with a diverse range of focus areas, have enabled the development of local projects that are both sustainable and efficient: urban and environmental design, buildings and their uses, energy and networks, mobility, innovative urban services, the renovation and energy storage of building envelopes, participatory housing, a new generation of urban heating networks, ageing and home care.

What are some of the ISO standards being used to support your city’s efforts?

ISO 37101 for the sustainable development of cities and communities provides new perspectives on demonstration buildings and model urban projects. It enables cities to optimize their management system and refine their governance based on the principle of continuous improvement. The ISO standard was thus tested in the development of the Environmental Charter for the innovative Presqu’île demonstration district. On the strength of this experience, Grenoble-Alpes Métropole has once again committed to applying ISO 37101 to one of its flagship projects over the next two decades: the GRANDALPE project.

Tell us about this smart cities project you’re engaged in and some of the anticipated outcomes. What is the greatest challenge facing cities today, and what would you tell a city leader trying to solve it?

More than just an urban project, GRANDALPE is unique in its predominantly human dimension. It consists of collective projects to improve community life and promote cooperation in order to achieve more social justice and intergenerational equity across a 400 ha central area inhabited by 30 000 people in the geographical heart of the metropolis.

While the project takes a city-focused approach, with a national or even global reach, people’s daily life is also a key concern. Particular attention is given to quality of life by focusing on the provision of meeting places, local shops and businesses (as a source of social contact), better accessibility and pleasant public spaces, underpinned by a “park in the city” concept.

The GRANDALPE project aims to transform the heart of the Grenoble metropolis by 2040, with the help of the area’s inhabitants and stakeholders. Its goal is to achieve excellence and to lead by example.

How can ISO standards help support some of these challenges?

ISO 37101 establishes a reference framework and a common language for all types of urban projects. It enables a successful interpretation of the synergies between projects and the different stakeholders across the region, in the interest of a common goal.

ISO 37101 is also an opportunity for dialogue between the different regional levels by inviting them to assess the impact of a project or an action on a wider territorial scale; in other words, outside the boundaries of the project area itself. Once the communities have completed the assessments, the ISO standard enables them to qualify and quantify their strategic goals and draw up an operational action plan for the regional development project.

This news comes from the ISOfocus:

May/June 2020
As priorities are reassessed in the post-Covid era, this ISOfocus issue brings a renewed interest for sustainable cities.
Elizabeth Gasiorowski-Denis
Editor-in-Chief of ISOfocus